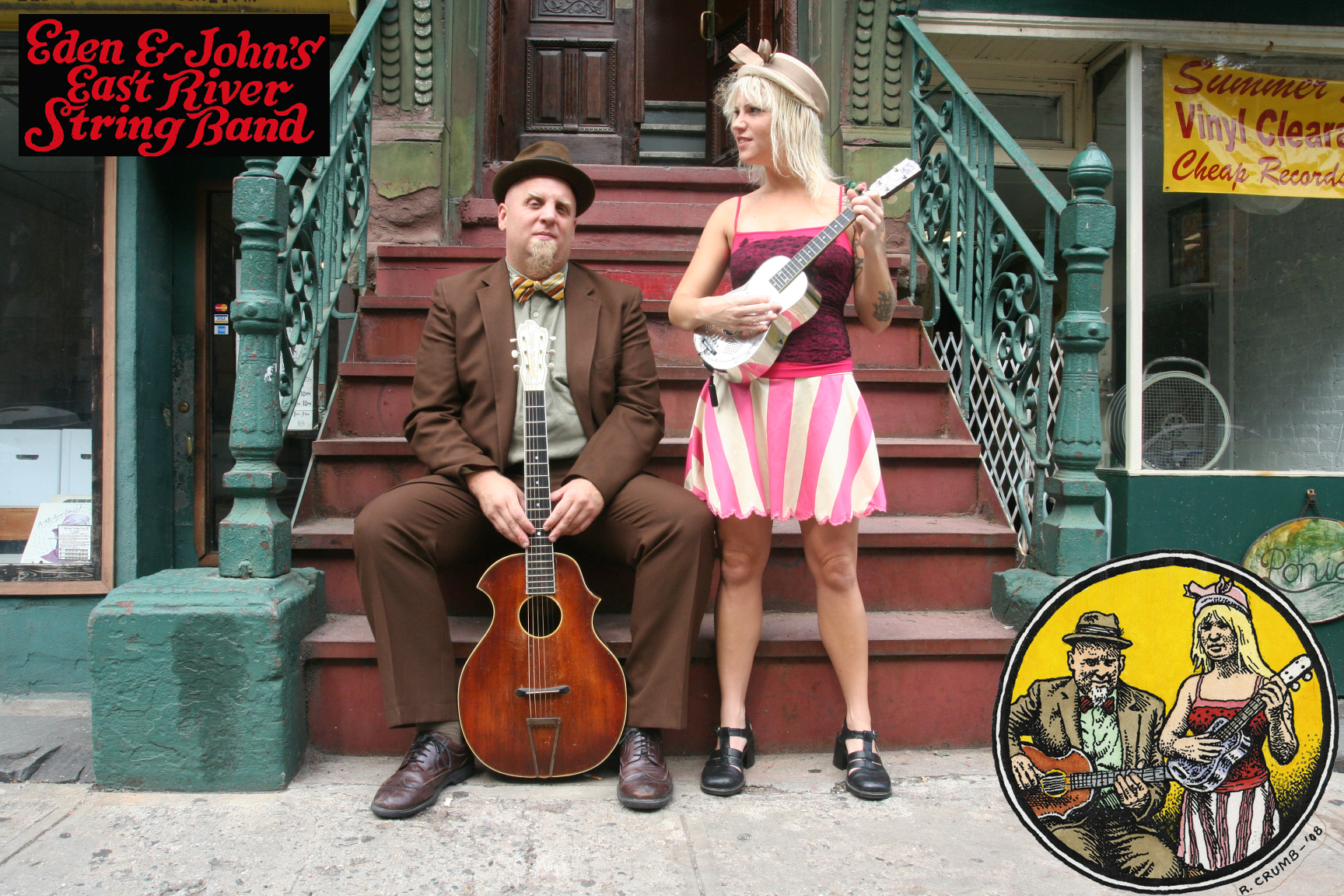 Eden and John’s East River String Band was founded in 2005 by husband and wife Eden Brower & John Heneghan. Cheap Suit Serenader co-founder Robert Crumb joined them in 2009 and Brotherhood Of The Jug leader Ernesto Gomez joined in 2012. They perform as either a duo, trio or quartet depending on where the gigs are located and often have other folks sit in on their live performances and recordings including “The American Songster” Dom Flemons, Otis Brothers & Canebreak Rattlers founder Pat Conte, Whiskey Spitters’ Geoff Wiley and Eli Smith, Walker Shepard & Jackson Lynch of the Down Hill Strugglers.
They have released nine records on LP and CD and have played their brand of old-time, good-time music, a vast spectrum of traditional American Blues, Country and Popular music ranging from the late 19th to the early 20th Century around the world.

David Fricke of Rolling Stone Magazines said, “Eden And John cover country blues from the 78-rpm era with crisp fervor and a natural flair that suggests loving study and a respect for the original records”.

My name is John Tefteller-I have been buying and selling rare phonograph records for the past 35 years. I have a worldwide reputation for my knowledge of rare records, especially Blues 78’s.
My personal collection contains some of the rarest records on the planet. My auctions in Discoveries magazine have featured some of the rarest records on the planet. Many have sold for “record” prices. For top quality records, no one can top The World’s Rarest Records!
I have the world’s largest inventory of Blues, Rhythm & Blues and Rock & Roll 78’s with over 75,000 in stock. I also have a fabulous selection of over 100,000 45’s from the 1950’s and early 1960’s in the following categories: Blues, Rhythm & Blues, Rockabilly, Rock & Roll, Girl Groups, Surf and Country.
I am always interested in buying more rare records! I will pay top dollar for your rare Blues and Rhythm & Blues 45’s and 78’s in Near Mint condition. Before you sell your rare records to ANYONE, you should at least talk to me. I consistently pay the highest prices for records for my collection and am more than fair when buying for resale.
Why Sell Your Vintage 78 RPM Records to Joe Lauro?
IMMEDIATE CASH PAID.
FAST COURTEOUS SERVICE
WILL TRAVEL ANYWHERE FOR THE “RIGHT” COLLECTIONS. WE RECENTLY TRAVELLED TO HOLLAND TO PURCHASE A COLLECTION OF 3,000 VINTAGE 78 RPM RECORDS.
30 YEARS OF IMPECCABLE SERVICE AND REFERENCES
If you think you have the RECORDS WE BUY, use our simple 78 RPM RECORD INFO FORM to email or mail us a list of the Antique Records you have.
Joe Lauro has been collecting Vintage Shellac Records, Victrola Records and 78 RPM Records for 40 years. His collection of old 78 RPMs is known as one of the best in the world for circa 1925-1935 Jazz, Blues, Gospel and Country Music 78RPM Records.

Since 1975, Joe has held bi-monthly auction lists of duplicate records or recordings which he does not collect. He also sells old 78 RPM recordings from other collectors on consignment. His auctions are legendary amongst the small world of Vintage Shellac Record collectors.
Joe’s interest in old 78 RPM Blues, Jazz, Gospel and early Country music records began as a child. Home from school one day with the flu he turned on the old JOE FRANKLIN SHOW “MEMORY LANE”. Franklin, was a film and record collector and ran on the program a circa 1930 short film featuring EDDIE CANTOR… something about that film struck Joe and he began staying up late at night waiting for old re-runs of Eddie Cantor and Al Jolson films… and then, at age 15 began searching the local Antique stores (on his bicycle!) for their old Phonograph Records… I guess you can say it exploded from there!
If you want to sell your old 78 RPMs, Joe wants to buy them for his Vintage Shellac Record, Victrola Record and 78 RPM Record collection.

We buy private collections & archives, store stocks and radio station libraries of 78 RPM records in these genres: 1920 and 1930s – Blues singers, Jazz Bands, Jug Bands, String Bands, Country, Gospel, Foreign (Greek, Turkish, Italian, Irish, Puerto Rican, Cuban Brazilian, African and more), and Soundtrack or Advertising Disks on labels like Okeh, Victor, Vocalion, Gennett, Brunswick, Paramount or Vitaphone. 1950s Rock & Roll, Blues Singers, Bebop Jazz, Rockabilly, and Do-Wop Vocal Groups on labels like Sun, Aristocrat, Dial, Gotham or Chance.
WE PAY TOP DOLLAR FOR 78 RECORDS IN CHOICE CONDITION! In addition to walk in collectors who frequent our three retail stores, we sell records by mail to all the serious collectors around the world, and in combination this gives us a solid customer base for both the rare and common records in your collection, allowing us to pay a premium for your records.
PRESERVATION We are not simply a record dealer or store. When we buy an important collection of 78s, they may become part of our ongoing preservation effort. We will transfer, remaster and add the important rarities in your collection to our website so future generations of passionate music fans can discover the amazing music of the 78 period.
DEPTH OF KNOWLEDGE
Our 78 buyer has 30 years of experience buying and selling 78s. He has purchased major 78 collections in the US and abroad, run worldwide mail order auctions and fixed price sales over this period, and will share his knowledge of the 78 market in an honest straightforward appraisal of your collection.

WE PAY FINDERS FEES
For any lead that culminates in the purchase of a quality collection of rare records by artists such as King Oliver, Bix Beiderbecke, Bessie Smith, Muddy Waters, Charley Patton, Charlie Poole, Charlie Parker or Charlie Feathers.

SELL YOUR 78 RPM RECORDS TO AMOEBA – CONTACT OUR 78 BUYER

Blues • Jazz • Country • Race Records •
Hillbilly Records • Foreign Records • Blues Singers • Jazz Bands • Jug Bands • String Bands • Gospel • Calypso • Cajun • African • Caribbean • Ethnic Music • Rock & Roll • Rockabilly • Doo-Wop Vocal Groups
I am Joel Slotnikoff, publisher of the BLUES WORLD web site. I have been auctioning 78 rpm records since 1995.  During that time I have auctioned tens of thousands of rare records. I buy individual records and entire collections. I also accept records on consignment.
Many people contact me wanting to know the value of their 78 rpm records. The factors that create value are desireablility, rarity and condition. The most desireable categories of valuable 78 rpm records are pre-war blues, pre-war jazz and a few pre-war gospel and hillbilly records. Some of these, especially ones in good condition are worth into the thousands of dollars. There are also quite valuable post-war records of blues and rock and roll. The best publicly available price guide I am aware of is Jerry Osborne’s “Rockin’ Records.” It is available as a book and also as a (paid) weekly internet feed.
Most classical, dance band (1940s) and pop records have very little if any value.
To determine if your records have value you can email me a list. All I need to know is label and artist. If you have a great many records you could start by sending a list of 25 or 50 and that will usually give a good indication if the records have significant value. Of course there can always be on very valuable one in the midst of hundreds of worthless ones. Send your list to joelslot@bluesworld.com and I will be glad to advise you if you are sitting on trash or treasure.
I can assist you in disposing of your collection of blues, jazz and hillbilly 78s, or that of a relative.  I purchase collections outright and also accept records on consignment at favorable rates.
Record sellers who sell their records on eBay have a number of limitations:

1. In any given week (the normal length of an eBay auction) some collectors may be on line,
while others may be busy, tired or otherwise occupied.

2. And some collectors do not have internet or participate in eBay auctions.

3. Many collectors are skeptical of eBay auctions where records are sold by amateur sellers
who do not know how to properly grade the condition of a record.

4. Horror stories abound of records graded “Mint” that turn out to me in much lesser
condition, improperly packaged records that break in transit, and outright rip-offs.

By contrast, my hard copy catalog goes out to hundreds of top collectors in the United States, Europe and Japan.  They have a month to look through the catalog at their leisure and submit their bids.